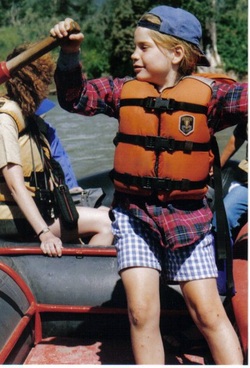 Beverly Stokes is a classical trumpet player turned singer-songwriter whose songs have been described as "music for gourmets" (Theo Volk, Johnny's Garden) and "a feast for the ears" (Dani Heyvaret, Rootstime). Her insightful and vivid lyrics pair with an intricate guitar style to create music that spans the indie folk and alt-country genres, and toys with the ragged edges of pop and indie rock. Stokes has toured in the USA, Europe, and the UK, and shared stages with Wild Child, Jim Adkins (Jimmy Eat World), Kevin Devine, Chris Pureka, and Shawn Mullins, among others. Her first studio album, All These Dotted Lines, was produced by Anna Coogan and released on her own label, Western Dream Records.

​The story of Beverly Stokes’ emergence as a powerful new voice in the American singer-songwriter tradition is marked first by a series of transformations. A Virginia native transplanted to Ithaca, NY. A classically trained trumpet player turned self-taught guitarist. A childhood musical diet of Mozart and Sondheim traded for the lyric-driven songwriting of Josh Ritter, Patty Griffin, and Gregory Alan Isakov. After this quick succession of changes, Stokes became known for her ability to transform noisy bars into listening rooms with songs that embody "an extraordinary mixture of poetry and observation, a gentle lyricism that seems to arise simply, organically from [her] experience and observation."

Her authentic approach quickly gained attention, including a 2014 songwriting residency with the Brush Creek Foundation of the Arts in Saratoga, Wyoming. But after several years of performing, Stokes still had no recorded music to show for her efforts. Songwriting had always been a solitary effort, and it was unclear whether recording should be any different. “For whatever reason,” Stokes writes, "I thought recording was something I was supposed to do by myself, at least the first time. It was something that was always on my list of things to do, but it wasn’t getting done. It was overwhelming and I didn’t know how to ask for help."

Fortunately, help swooped in anyway, in the form of musician and mentor Anna Coogan and pianist Brooks Miner. “Anna encouraged me to start playing with Brooks, and once we started rehearsing and performing together, I began to see my whole musical process in new ways.” After several months of rehearsals and shows, the project turned toward recording. “Anna forced the issue. She basically said that I needed to make a record, and if I couldn’t do it alone, we would do it together.” With Anna Coogan signed on as producer and the solid bones of an album arranged as a duo, the three traveled to Brooklyn to record at Acme Hall Studios. They recruited the help of drummer Mike Hunter, bass man Jeremy Chatzky (Bruce Springsteen, Steve Earle, Ronnie Spector), slide guitarist Joe Novelli (Orkestra Mendoza, Nive Nielsen), and cellist Hank Roberts (Bill Frisell, Tim Berne, Marc Ribot) to flesh out the arrangements.

The result, All These Dotted Lines, sounds seasoned and assured. The term “debut” belies the years of writing and performing that preceded this effort. Sonically, the record shifts seamlessly between soulful roots and dark indie folk. While the full band arrangements add warmth and depth to songs like “In the Morning” and “Sault Ste Marie", Stokes’ voice and evocative lyrics stand out against this backdrop as rare and powerful. In this latest transformation from an unknown troubadour toiling in obscurity to an established musician with a collection of beautifully orchestrated songs in hand, Stokes has carved out a new place for herself among emerging artists to watch.